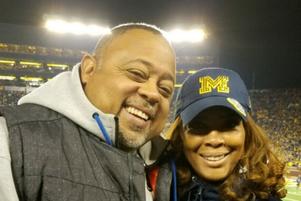 ​Week 3 takes me to Ann Arbor Michigan to see the wolverines host Wisconsin. For the second time in 3 games I find myself in what has been selected nationally as the College Football Game of the Week.  When I refer to Watkins men as college football players performing on the big stage; that is no exaggeration.  This week has me here to see a Big time Player, in the Big House, on the Biggest game of the week.  I call that Big TimeJ  This game only featured one Watkins man in Donovan Peoples-Jones at Michigan.  Believe me he deserves to be singled out by himself this weekend.

Michigan features Donovan Peoples-Jones (Watkins Class of 2017) as the starting wide receiver and punt returner.  Last season Donovan (aka DPJ) worked very hard to get into the receiver rotation.  Most of his exciting moments last year were from returning punts.  As a sophomore, DPJ looks to be one of the best receivers to join the Watkins Family; he is tall, strong, and powerful.  He resembles a Gazelle out there on the field running so effortlessly while moving faster than everyone else.  It’s absolutely amazing to observe in person.  Best stated as “pure poetry in motion”.  When I woke up to hear the announcers speak about this game, Desmond Howard was asked who he thought would make the biggest difference in this competition.  Dez eloquently proclaimed that he expected the biggest difference maker in this game to be Donovan Peoples-Jones.  He expected him to make plays in the punt return game as well as in the passing game.  Most football aficionados know the mentality of a punt returner.  It’s them against the world.  They receive the ball with 11 of the opposing team members running at him full speed and the task is to conquer them all.  He is shaping up to be one of the best in the nation.  DPJ is the offspring of two Michigan graduates so I am sure he is making them so proud to represent their family and their alma mater.  I have used so many exquisite adjectives to describe his physical capabilities; however I am exponentially more impressed with his performance in the classroom.  DPJ is on a pre-med track with aspirations to be a physician like his father and specifically an orthopedic surgeon.  After two full years of academics, he is carrying a 3.8 GPA and on course to graduate in 3 years.  Can you say WOW!!  More than his electric plays, this is what actually raises the hairs on the back of my neck.

Wisconsin must have gotten the memo from Desmond because they double and triple teamed him all game.  He made some very nice plays, but they were able to contain him while leaving his teammates open.  His performance open the doors for other players to take advantage of all of the attention bestowed upon him.  DPJ did however have some very nice punt returns to give the team great field position.  Michigan dominated the game from start to finish.  I was ushered to the game by board member Leland Stein as he covered the game from the press box.  I got the chance to sit with Donovan’s family, friends, grandfather and most importantly mother Roz!  When attending the Watkins weekend in DC the family was well represented with a full table of attendees.  Both Leland and the Peoples family send their regards and gave me a tremendous amount of Detroit hospitality.
Please take a minute to see DPJ make one of his many punt returns this one for a touchdown and you will get an example of what I am trying to describe.

** Games of the week are the games that are featuring Watkins Alumni. Everette will be in attendance. The second team listed above is the home team should you plan to attend. You can follow him real time on Twitter at Everedy65 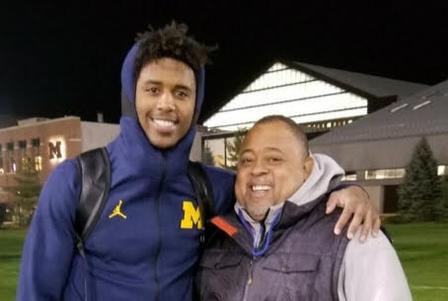 Watkins Game of The Week